For the past few weeks I’ve been working in spare time on a project that I originally did in high school. I wanted to resurrect it so that I could possibly take it to schools and give demonstrations. However, another opportunity has presented itself which offers much more visibility. I’ll be demonstrating this project to the Madison Children’s Museum, with the hope of turning it into an exhibit there.

The idea behind the project is to turn sound into light and see the sound waves. To accomplish this, a mirror is attached to a speaker. When a laser shines on the mirror, the speaker vibrates it and changes the angle of the mirror slightly, but enough to see. This alone is enough to see the effects of sound waves. The next step in my machine is to shine the reflected beam onto a laser attached at an angle to a motor. As the motor spins, the mirror rotates, and since it is at an angle it makes the reflected beam spin in a circle. This spreads out the wave over a circle, so you can see the waveform as actual waves. See the video for a demonstration.

The picture below is easier to understand. On the right side is a green laser. It shines onto the speaker. The mirror is a front-faced mirror to prevent double images, and it’s attached using hot glue to the center and also to the edge. This allows the mirror to pivot when the speaker vibrates. If the mirror were just attached to the speaker, it would only move forward and back without changing the angle.

After bouncing off the speaker, it is directed at a motor with a mirror attached at an angle. The angle is important because if it were flat it wouldn’t do anything to spin. Having the mirror at an angle makes the laser spin in a circle. When the speaker is making sound and the motor is turning, the laser shows the sound waves using persistence of vision. 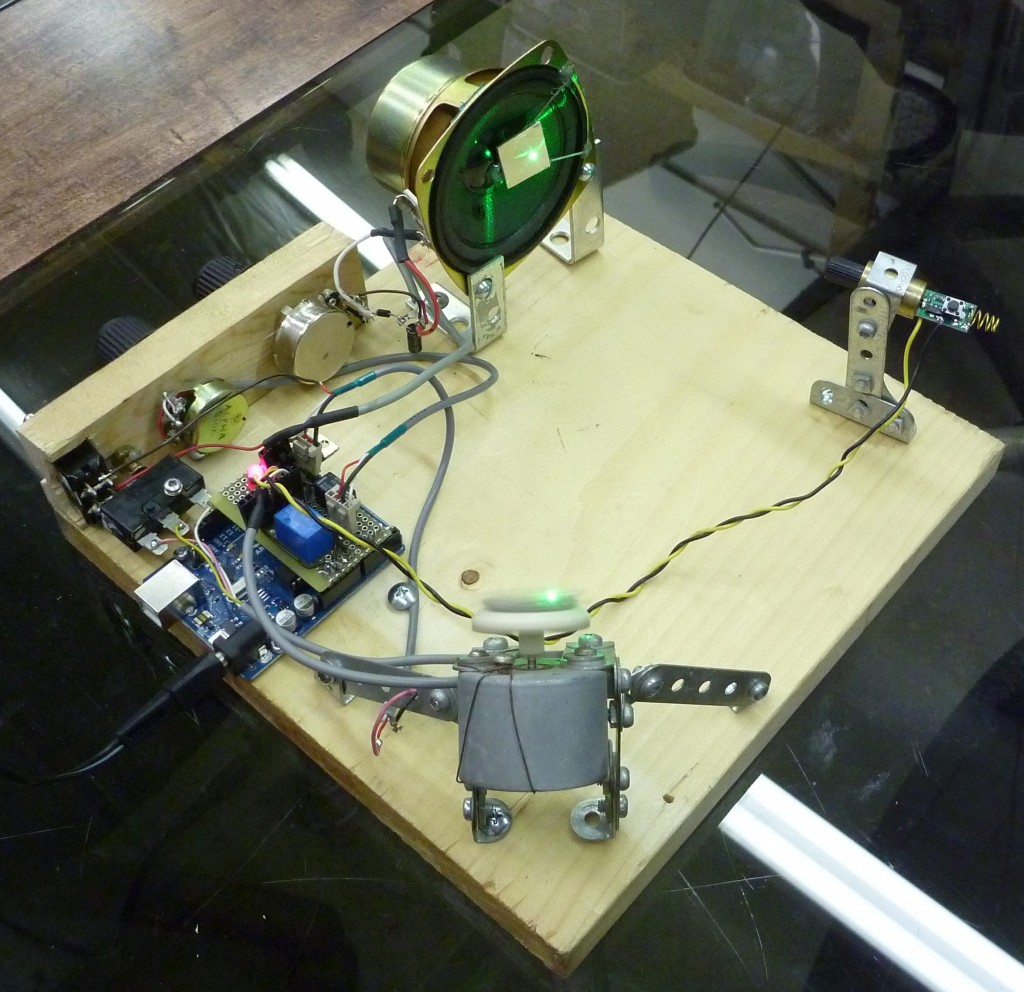 The laser shines on a mirror attached to the speaker, then to a rotating mirror. Controls turn on the motor and system, and knobs control frequency and volume.

The tone generated is a simple square wave from an Arduino, which manages the input knobs for the frequency, the switch for the motor, the laser, and has a timer that automatically turns everything off after 30 seconds (to prevent it from continuing to run after the children leave).